Captains of industry speak often of their enormous respect for storytelling and its power to inspire and motivate change. Storytelling is seen as a tool to teach important lessons, define culture and values and set a vision. More broadly story-telling is valued as a means of sharing ideas and explaining abstract concepts.

Successful story-tellers use descriptive and precise language to enhance their story telling. They use more complex language structures such as casual and temporal connectors and elaborated noun phrases and their use of noun/pronoun referencing successfully communicates the relationship of their ideas.

In an early childhood context, oral narratives provide the means for the educator to observe children’s ability to use language at the discourse level within a developmentally appropriate and naturalistic context. The literate language features used in narration such as adverbs, adjectives, casual and temporal markers and subordinate and relative clauses, are consistent with the written language children students need to master. Because oral language is closely related to written language, narrative proficiency is highly predictive of reading comprehension. Current research evidence demonstrates that explicit narrative instruction for typically developing and linguistically complex populations in the early years can lead to significant gains in oral language skills needed for proficient reading and writing (Peterson & Spencer, 2016).

Researchers from the University of Western Australia (WA), the WA Primary Principals’ Association and early childhood teachers collaborated to develop an approach for assessing oral language that allows teachers to better understand development of students’ oral story- telling ability. We were motivated to develop an assessment that was relatively easy for teachers to use and that would help teachers readily use the assessment to inform their teaching practice.

We would like to share our research with you as we have found that sometimes even the most experienced teachers lose sight of the value of explicitly teaching students to tell stories orally. We first provide an overview of the assessment process. We then explain the features of development in student oral story-telling ability. Finally, we share a case study to illustrate the value in teaching students to be oral story-tellers.

Overview of the assessment

The assessment uses books from The Frog Where Are You? series of books by Mercer Mayer as the stimulus for students’ story-telling. These books where selected because of their clear and simple illustrations and because they have a strong story line. Teachers can opt to use other books but care needs to be taking when selecting a book as a stimulus. There are many beautifully illustrated wordless books to choose from but such texts do not always include a simple storyline.

A student is first given time to look through all the pictures in the book. When the student is ready, they use the pictures to tell their story. It is recommended that the teacher makes an audio recording of the student’s performance.

To score the student, the teacher compares their performance to a series of calibrated exemplars. They are required to decide which exemplar the student’s performance is closest to or which two it falls between.When making this judgement, the teacher needs to consider the macrostructure of the performance such as whether there is a beginning, a complication, a resolution and the extent to which characters and setting are portrayed. They also need to consider the microstructure of the performance such as the sequencing and cohesiveness of ideas; the length or complexity of sentences and the variety of sentence beginnings; the grammar, including tense; the vocabulary and descriptive language used; and the articulation of words.

The assessment, and resulting scale, is appropriate for students aged to 4 to 7 and the scale range is from 120 to 300 score points. Exemplars are provided at increments of 20 on the scale. Further information about the research we undertook to develop the oral narrative scale is reported in the article referenced below.

Following the successful completion of the research, the assessment was incorporated into the Brightpath reporting and assessment software. Brightpath was adopted as the WA state testing program for primary schools in 2015 and is now used in schools across Australia.

As mentioned earlier, a key motivation for our research was to help teachers better understand development of students’ oral story-telling ability.

Figure 1 provides a summary of the key features of development in students’ oral narratives. The score ranges refer to the Brightpath oral narrative scale scores. It can be seen that students start by simply describing the actions depicted in the pictures and naming objects. As students progress, they start to craft a story and include an orientation and a complication and they describe their characters beyond simply naming their character. Students working at the top of scale demonstrate a strong sense of storytelling. Not only do they utilise the macrostructures of storytelling, they also begin to select words and phrases and manipulate sentences to enhance their storytelling.

Sample exemplars are shown in figure 2. The exemplars provide substance to and help illustrate the performance descriptors. The exemplars in particular highlight what experienced early childhood teachers tell us. ‘If a student can’t tell you a story, they won’t be able to write it.’ 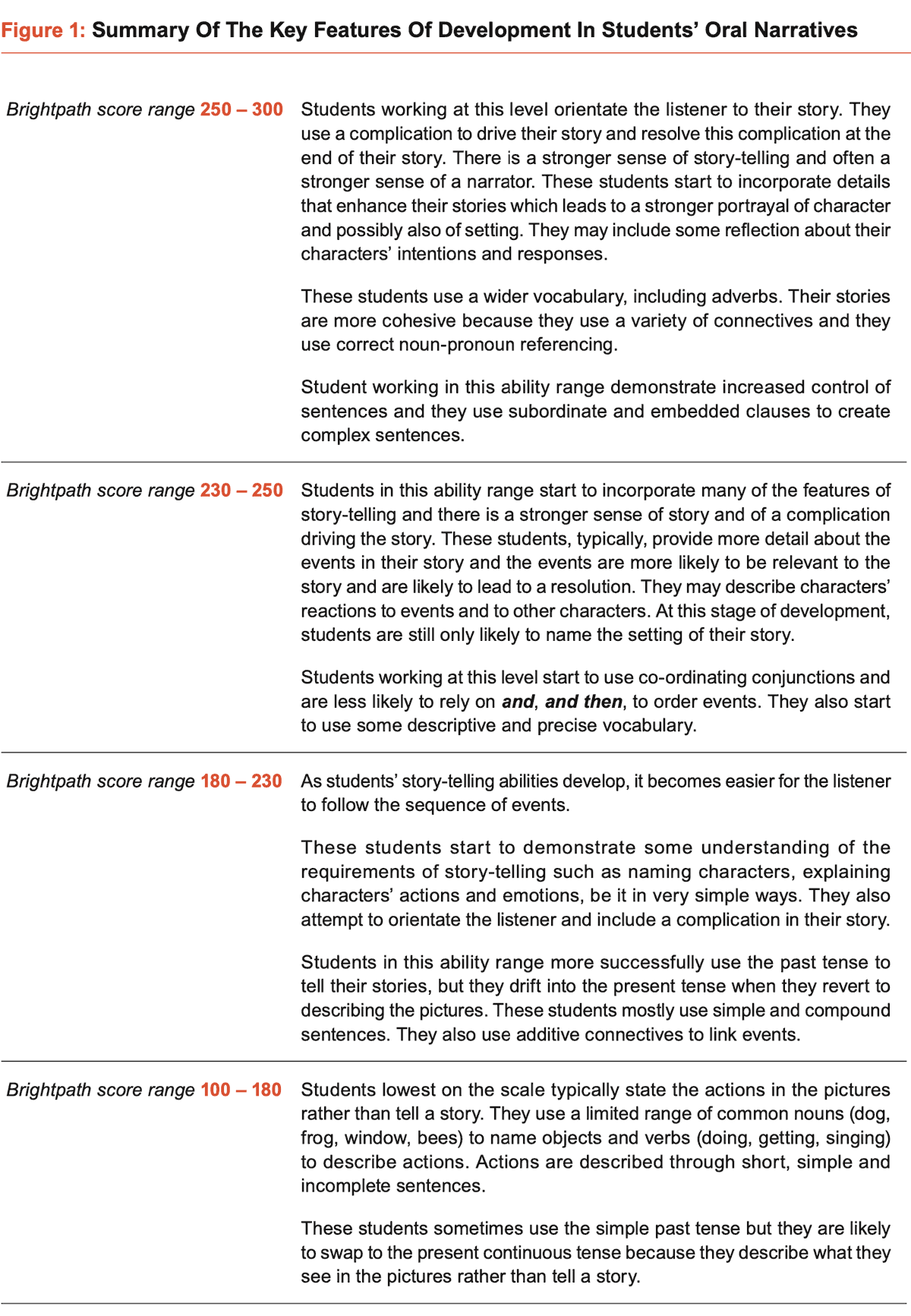 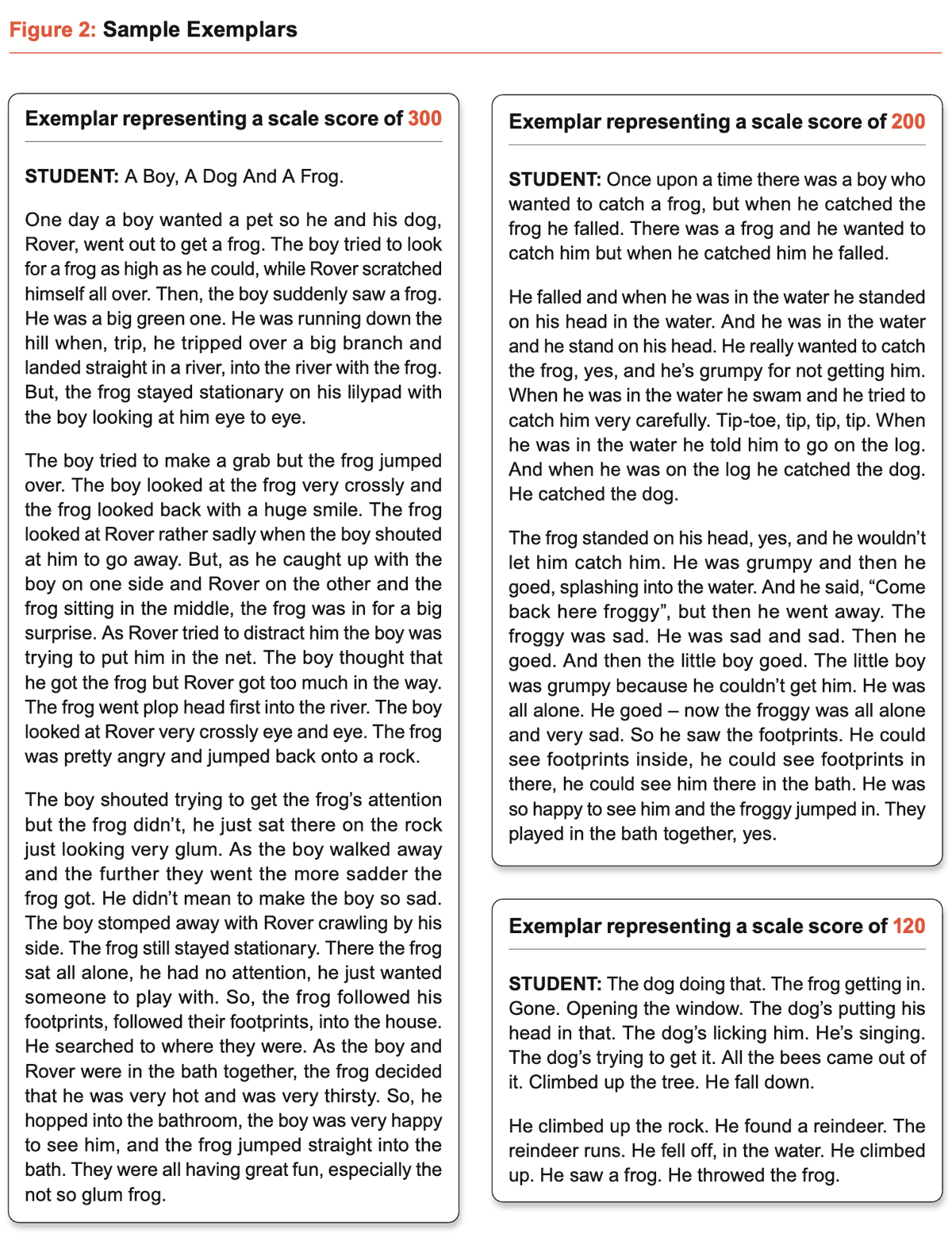 We would now like to share with you a case study which for us illustrates the value in explicitly teaching oral narrative in early childhood. The teacher in this case study teaches in a small government school on the outskirts of Perth. She spent five weeks teaching her Year 1 students how to tell stories.

Each week the teacher focused on a different aspect of narratives and she continually helped students see the relationship between these different aspects of story-telling. She also gave her students plenty of time to have a go at telling stories.

It can be seen that all students improved as a result of the intervention and that the progress was marked. Extracts of one student’s pre- and post-test oral narrative are shown in figure 4. Its delightful to see how much this student learnt in five weeks. 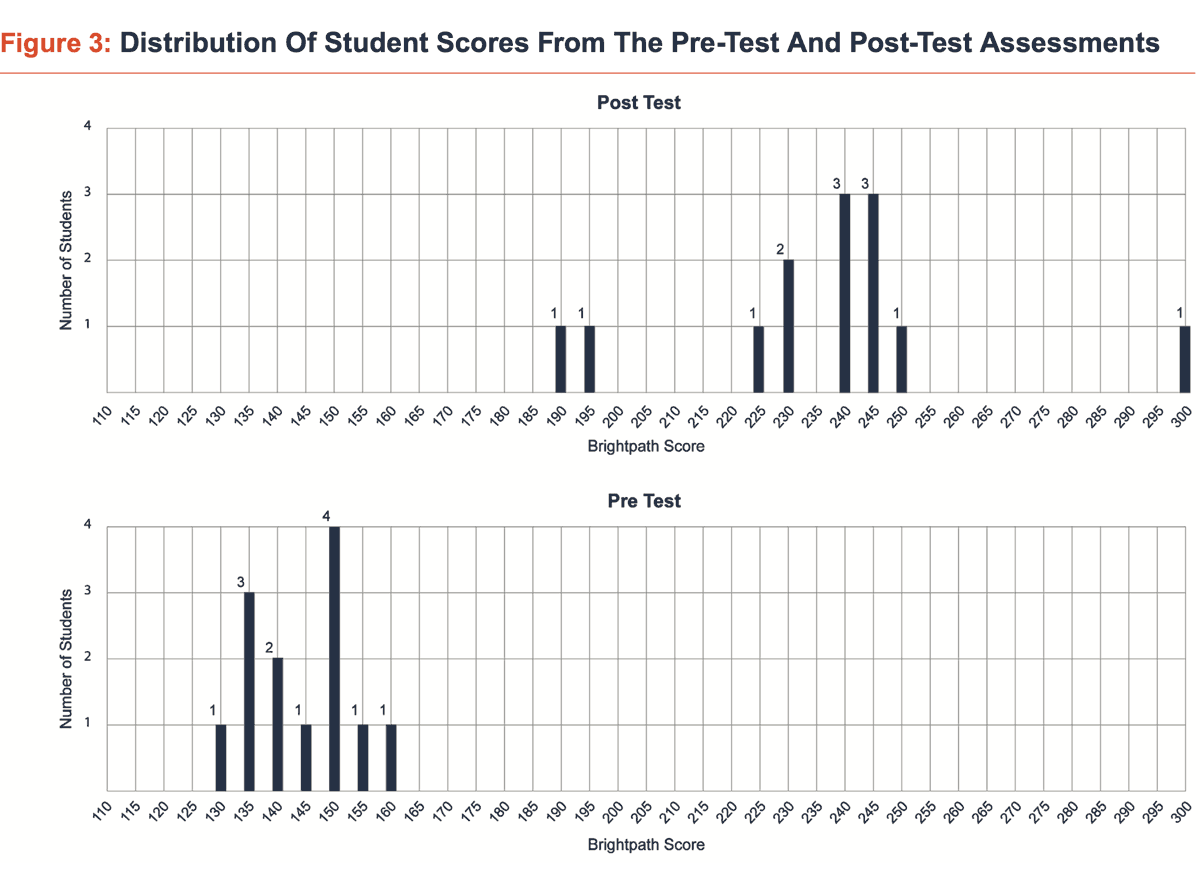 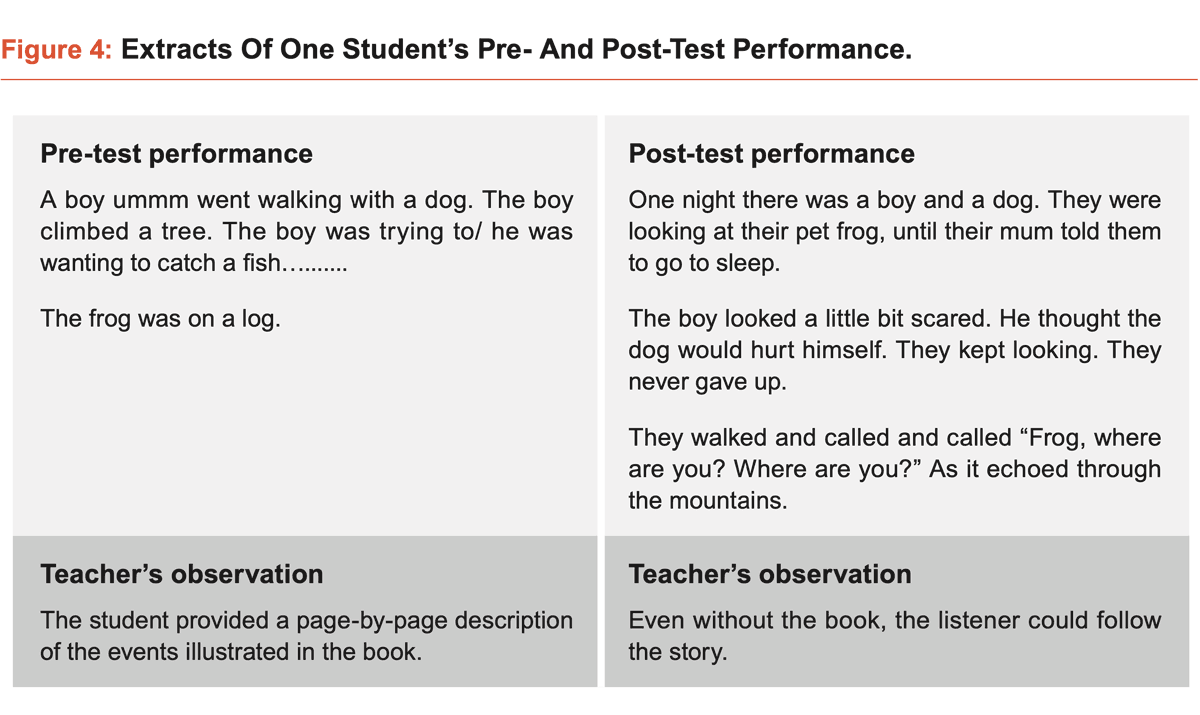 We began by explaining that the researchers and teachers collaborated to develop an approach for assessing oral language that would allow teachers to better understand development of students’ oral story-telling ability. We hope that our discussion has not only provide insights into the development of students’ oral story-telling but will also help you reflect on ways you can incorporate the explicit teaching of oral narratives into your curriculum. Perhaps it will help you persuade your school leadership team that before you can teach your students how to write a story, you need to teach them how to tell a story.

The case study arises from a small-scale research project undertaken by four schools. Many of the teachers commented on the fact that their students transferred what they had learnt about oral narratives to their written narratives. They also commented that although they spent less time teaching writing, their students’ writing improved more quickly. This is anecdotal information but perhaps a valuable action research project, to undertake with colleagues, would be to examine the impact of explicitly teaching oral narratives on students’ writing development.

Dr Stephen Humphry has extensive experience in the NAPLAN and large-scale testing programs. His research has focused increasingly on developing novel approaches that allow classroom teachers to reliably assess students in areas not amenable to large-scale testing such as Visual Art and Science Investigations.

Kerry Miller is an early childhood teacher with over 35 years teaching experience in WA, Victoria and internationally. Kerry holds a Master’s degree in Education (Reflection and Metacognition).

Rosemary Simpson. For over 25 years, Rosemary was the Principal of the North East Language Development Centre, a public school in Western Australia that caters for students with Developmental Language Disorders. Rosemary is a Co-founder and Director of Tracks to Literacy who supports many government and non-government schools in the implementation of an evidence-based approach to teaching oral language.